Pricing depends on the quantity you order and delivery format. For a price quote, email us with your contact information and your list of titles or call us at 310-622-7267 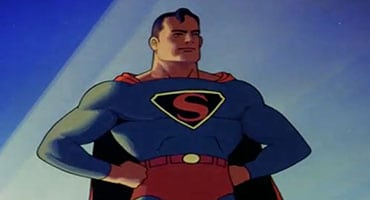 Classic short form public domain cartoons from Popeye to Betty Boop, Gumby to the New Three Stooges to WB Classics to Fleisher Studios (including Superman). Everyone loves our cartoons! 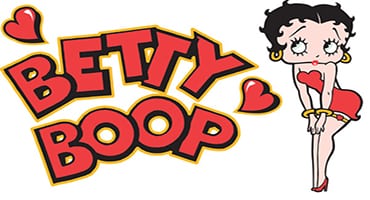 A one-time buyout fee. No royalties are applicable.

A purchased public domain title is yours to use forever.

What are our Hours of Operation?

In Who Framed Roger Rabbit? (1988), private detective Eddie Valiant is slumped at a table at the Ink and Paint Club, awaiting suspect Jessica Rabbit’s performance,

when a voice calls from off-screen, “Cigars? Cigarettes?” With just two words in that warbling baby voice, Eddie knows who the cigarette girl is before he sees her: Betty Boop.

Betty Boop in fact starred in one color cartoon, Poor Cinderella of 1934. That it was Fleischer Studios’ first foray into color speaks to Betty’s popularity. Poor Cinderella boasts lovely painted backgrounds, and the surprise of Betty as a redhead, supporting her longstanding likening to Clara Bow. Her direct model, however, was singer and Paramount star Helen Kane, known for her boop-boop-be-doop laden rendition of “I Wanna Be Loved by You.” The song is also associated with Marilyn Monroe’s rendition in Some Like it Hot (1959). Notably, Monroe’s character is named Sugar Kane. Adding to the palimpsest, Helen Kane, a white adult, copied her act from a black child performer Esther Jones, known as Baby Esther. The discovery of Kane’s plagiarism didn’t leave her a leg to stand on when she attempted to sue Fleischer Studios and parent company Paramount for stealing her act with the creation of Betty Boop.

There’s a dose of Shirley Temple in Betty’s giggly naïveté as well, with an equal measure of Mae West in her curvaceous sexuality. Betty Boop “combined in appearance the childish with the sophisticated,” the judge wrote in the 1934 case of Fleischer Studios v. Ralph A. Freundlich, Inc., adding that she has “the most self-confident little bust imaginable.” That very combination of coy and come-up-and-see-me-sometime was no doubt essential to her stardom in Japan, where she remains an icon. Osamu Tezuka, the godfather of anime and a child of the 1930’s, is widely suspected of finding inspiration in Betty’s big eyes.

Fleischer Studios paid tribute to Betty Boop’s Japanese fan base with 1935’s A Language All My Own. It’s a favorite cartoon of modern day chanteuse Janet Klein, bandleader of Janet Klein and Her Parlor Boys, who plays songs from the 1910’s-1930’s and who has also found fans in Japan. In A Language All My Own, Betty flies her own plane to the Land of the Rising Sun, a nod to Amelia Earhart’s recent solo flight across the Pacific. There Betty takes to the stage in a theater packed to the rafters, donning a kimono and singing in Japanese as well as English. Head animator Myron Waldman took pains with his depiction of Japanese culture and even previewed the cartoon for feedback from Japanese exchange students. Fleischer Studios can’t be said to have shown such cultural or racial sensitivity in any other Betty Boop picture.

The studio did have to adhere to other “moral” considerations when enforcement of the Motion Picture Production Code ramped up that year. The Hays Code, as it’s commonly called, prompted Fleischer Studios to dress their star flapper more modestly and give her more conventional roles such as secretary and school teacher. A Language All My Own marks the vamp’s last appearance in her classic skimpy dress. These changes tasted all the more bitter given that Betty Boop was for adults as much as children. Betty Boop soared to fame precisely because of the adults in the theater, a Depression audience whom she reminded of better times in the Roaring Twenties. The Hays Code’s stifling of Betty’s spirit gradually cost her popularity. 1939 would see her last original Fleischer picture. If left to her sexy style and zany escapades, she surely would have gone on to color in the 1940’s.

“But I still got it, Eddie,” Betty assures Valiant back at the Ink and Paint Club, giving a boop-boop-be-doop *boop*!

Even the hardboiled detective has to smile, “Yeah. You still got it.”

Who Framed Roger Rabbit? was released in 1988. The 1980’s was a decade preoccupied with nostalgia, proving ripe for a Betty Boop comeback. She enjoyed two television specials, and an explosion of merchandise. Betty Boop merchandise has kept the character in the public eye ever since.

“This merchandise has reached such a high level of popularity that even drug dealers have been known to use it,” the judge wryly noted in the 2011 Betty Boop merchandise rights case Fleischer Studios, Inc. v. A.V.E.L.A., Inc., referring to a prior case in which methamphetamine was shipped inside a ceramic Betty Boop doll.

In 2017, fashion designer Zac Posen created two Betty Boop inspired dresses. Pantone developed the color “Betty Boop Red” for the fabric, and the revived Fleischer Studios released a promotional Betty Boop cartoon co-starring Posen and his designs. Being that Posen is a judge on Project Runway All Stars, his endeavor was channeled into a Betty Boop challenge on the show in 2018. The winning designer received the opportunity to create a Betty Boop collection for Torrid, the plus-size women’s clothing company. On the beauty front, big-eyed Boop appeared in a 2012 Lancôme mascara commercial, while the 2016 YouTube video “Betty Boop Makeup Transformation Tutorial” has received over twenty-six million views.

The fashion and cosmetics vein of Betty Boop fandom points to the #1 reason for the character’s enduring appeal: She’s a woman. Created in 1930 as a poodle girlfriend for Bimbo the dog, she quickly proved the more lovable character. Poodle-like only in her ears and jowls, Betty was redrawn as fully human in 1932, a transformation that would seem to allow greater expression of her sexuality. It also seems to make Betty Boop the first human female protagonist of an animated series. There have been precious few in the eight decades since, and even fewer who aren’t children. That Betty Boop was not conceived as a heroine but was received as one attests to the hole she fills in the animation cannon.

The RetroFilm Vault. Take a step back.